For scripts from any of these productions, email Katie Brokaw at kbrokaw@ucmerced.edu 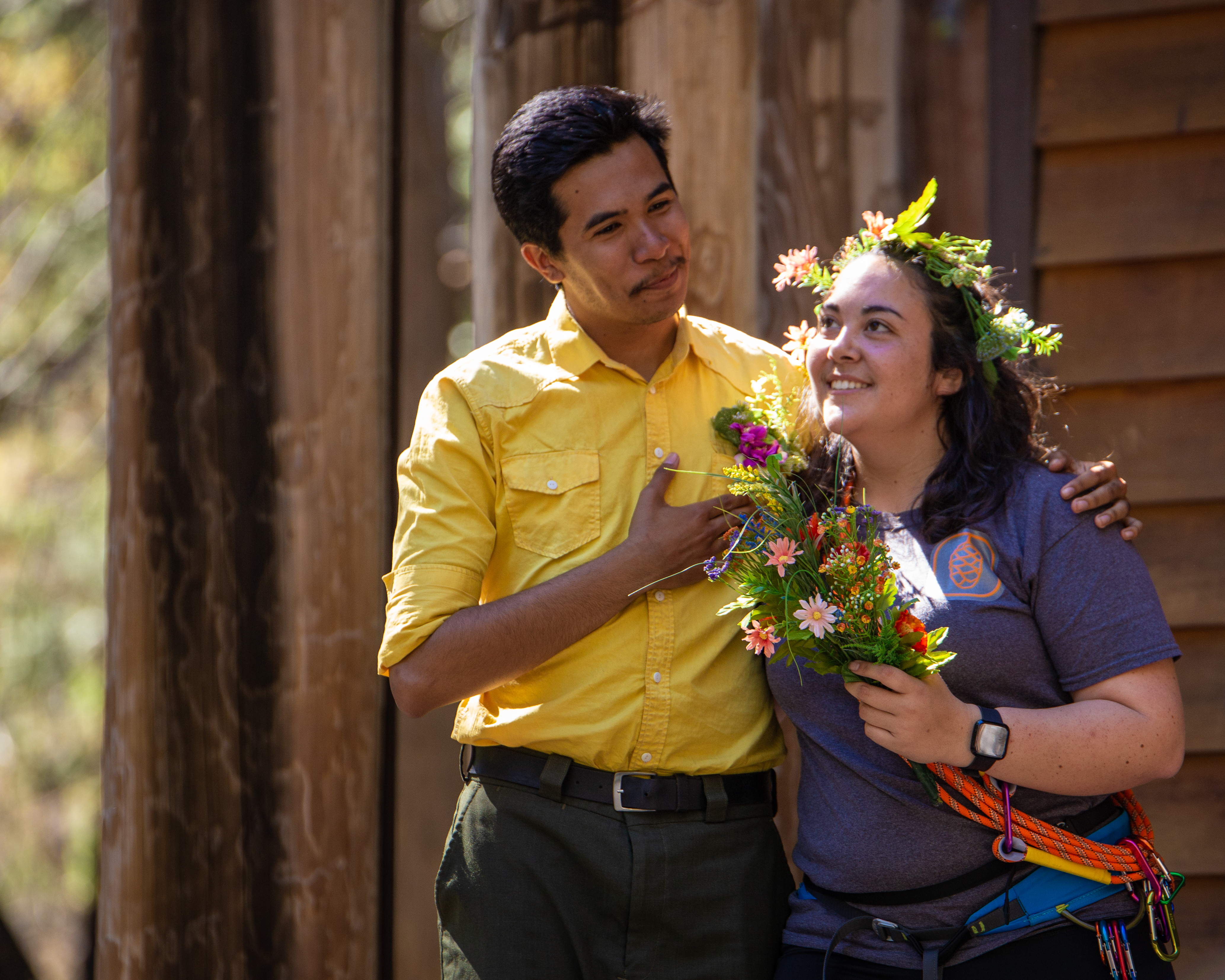 Sierra, (named Duke Senior in Shakespeare’s play) tells her forester friends that she’s found life in the woods to be “more free from peril than the envious city.” In the forest of Arden, one finds “tongues in trees, books in the running brooks, sermons in stones and good in everything.” It’s an experience that many characters in the play have: Rosalind and Orlando—unable to communicate when they meet in the city—find themselves able to speak when among trees and brooks and stones. City girl Touchstone falls in love with nature and a park ranger, and most dramatically, both Oliver and Duke Frederick are “converted” from their greedy ways by spending time in Arden. Arden makes people more loving, more aware, more committed to each other and to the natural world. As Shakespeare himself says in another play, “one touch of nature makes the whole world kin.”

Touchingly, “Arden” isn’t just a fictional place: it was the name of a vast forest very near where William Shakespeare grew up (fragments of which still survive skirting the campus of the University of Warwick). His mother’s name was Mary Arden, a name that reveals the interconnectedness of place and identity, of earth and motherhood.

Our “Arden” is Yosemite National Park, a place that, in the words of Ranger Shelton Johnson, was to Shakespeare “an unknown land that could only be visited in his dreams.” But Shakespeare was aware of the transformational power of nature, the way time in the woods can deepen bonds between humans (and indeed, many of our cast members have their own stories of falling in love in Yosemite), and can make people aware of both the preciousness of life on earth and the dangers that it faces.

As You Like It reveals that Ardens like Yosemite and the woods near Shakespeare’s English hometown save us by nurturing (and naturing) love and self-discovery. But, as this production tries to highlight, this is also true biologically: trees themselves are carbon sinks that mitigate the encroaching warming of our planet, and protected wildernesses like Yosemite harbor the water, soil, and ecosystems that keep earth’s creatures fed and alive. Ardens allow all animals—including humans—to eat, drink and breath.

This year’s production is thus dedicated to the firefighters and National Park and Forest Service staff who protect America’s Ardens, and to the scientists, children, and indigenous activists working to save the world. 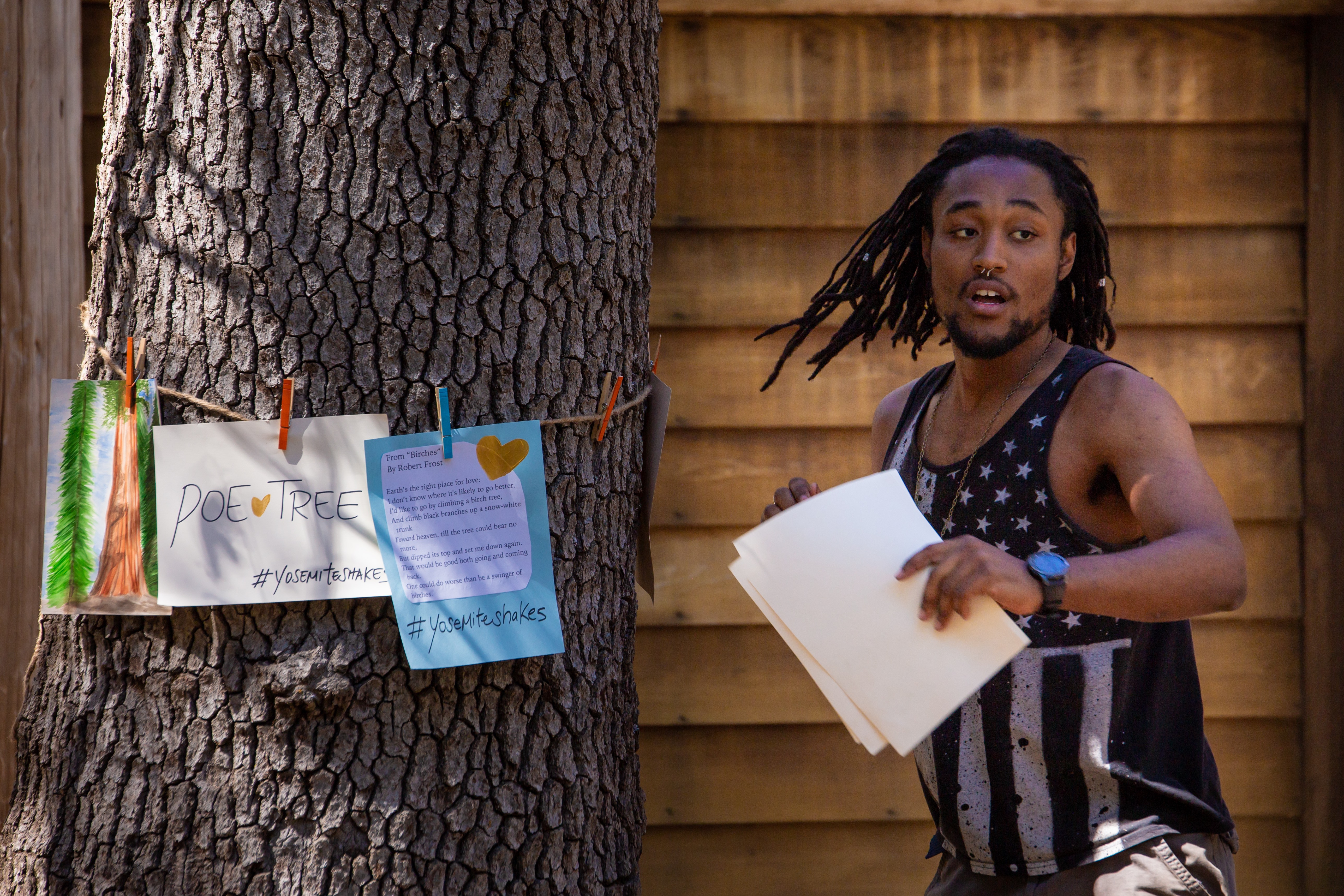 In the city, Duke Frederick becomes CEO of Frederick Energy by overthrowing his sister Sierra and banishing her. A man named Orlando is fed up with his brother Oliver’s mistreatment. When Orlando wrestles Charles the Wrestler in front of Duke, his niece Rosalind, and daughter Celia, he and Rosalind feel a connection, but are unable to communicate their feelings. Duke decides to banish Rosalind from the city too, and she, her cousin Celia, and their friend Touchstone escape to the forest of Arden together in hopes of finding Rosalind’s mother, Sierra. Rosalind disguises herself as a boy called “Ansel” and Celia as Ansel’s sister, “Gretel.” Orlando also escapes to Arden after being threatened by both Duke and Oliver.

In Arden, Sierra and her foresters sing together and discuss the ethics of killing deer and the destruction of lands. Rosalind, Celia, and Touchstone arrive in the forest and are given a cabin by the foresters. A half-starved Orlando stumbles upon Sierra and her followers, who feed him while a traveler named Jaques talks about how “all the world’s a stage.” Still lovesick, Orlando begins putting poems to Rosalind on the trees, while Touchstone begins spending time with a park ranger named Audrey. When Rosalind finds Orlando in the woods, she speaks to him disguised as the boy “Ansel,” and tells him that she will “cure” his love if he will pretend that “he” is “Rosalind.” The disguised cousins encounter a firefighter named Silvius who is in love with Phoebe, but Phoebe falls in love with “Ansel” as soon as she sees “him.”

Oliver arrives in the woods and reveals that his life was saved from a snake and mountain lion by Orlando, an experience that has made him a better person. A reconciled Oliver and Orlando discuss Oliver’s love for “Gretel” (Celia), and Orlando tells “Ansel” that he is tired of only pretending to love. In the final scene, identities are revealed and friendships and partnerships solidified as the community vows together to help save their world.

Cast, in order of speaking 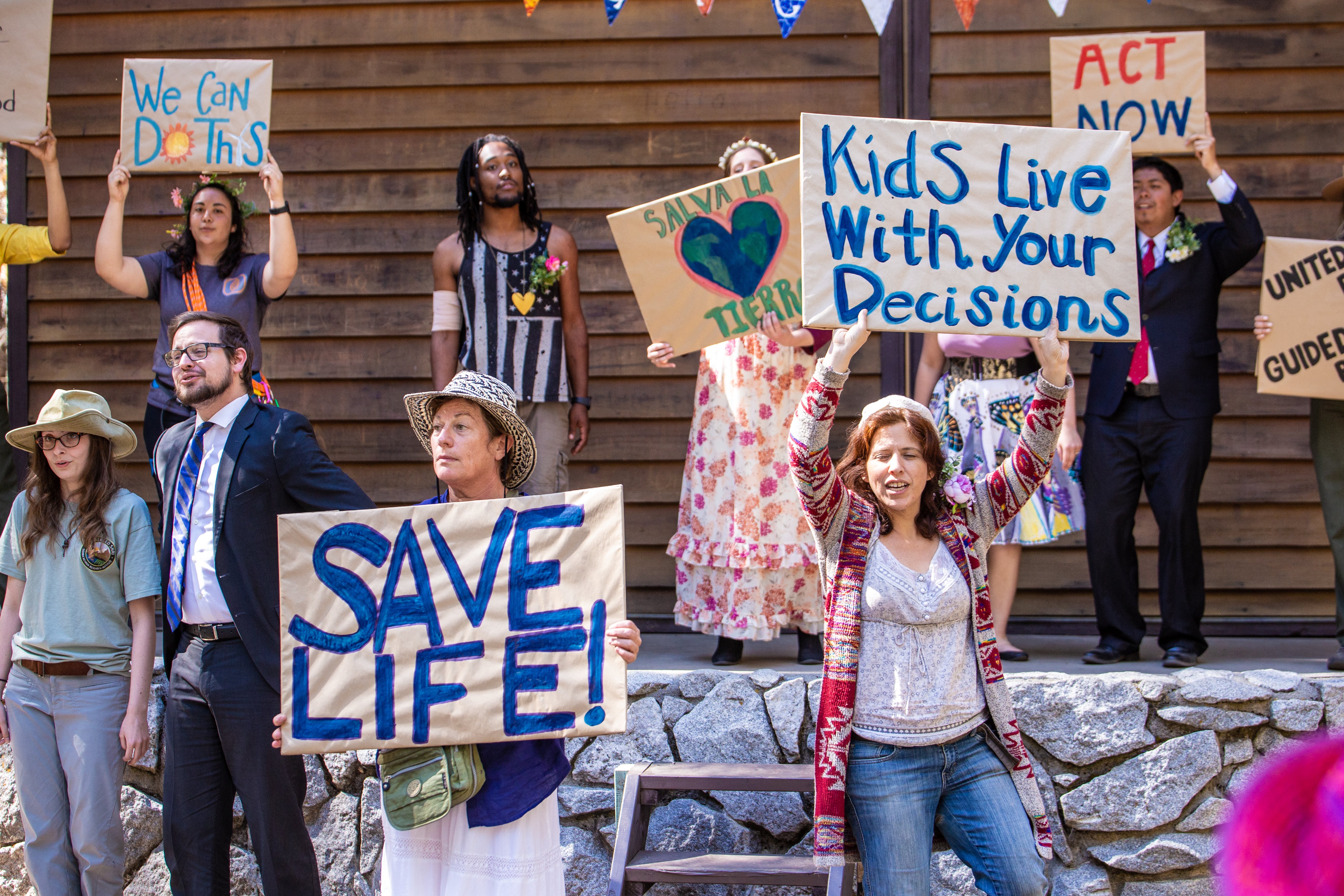 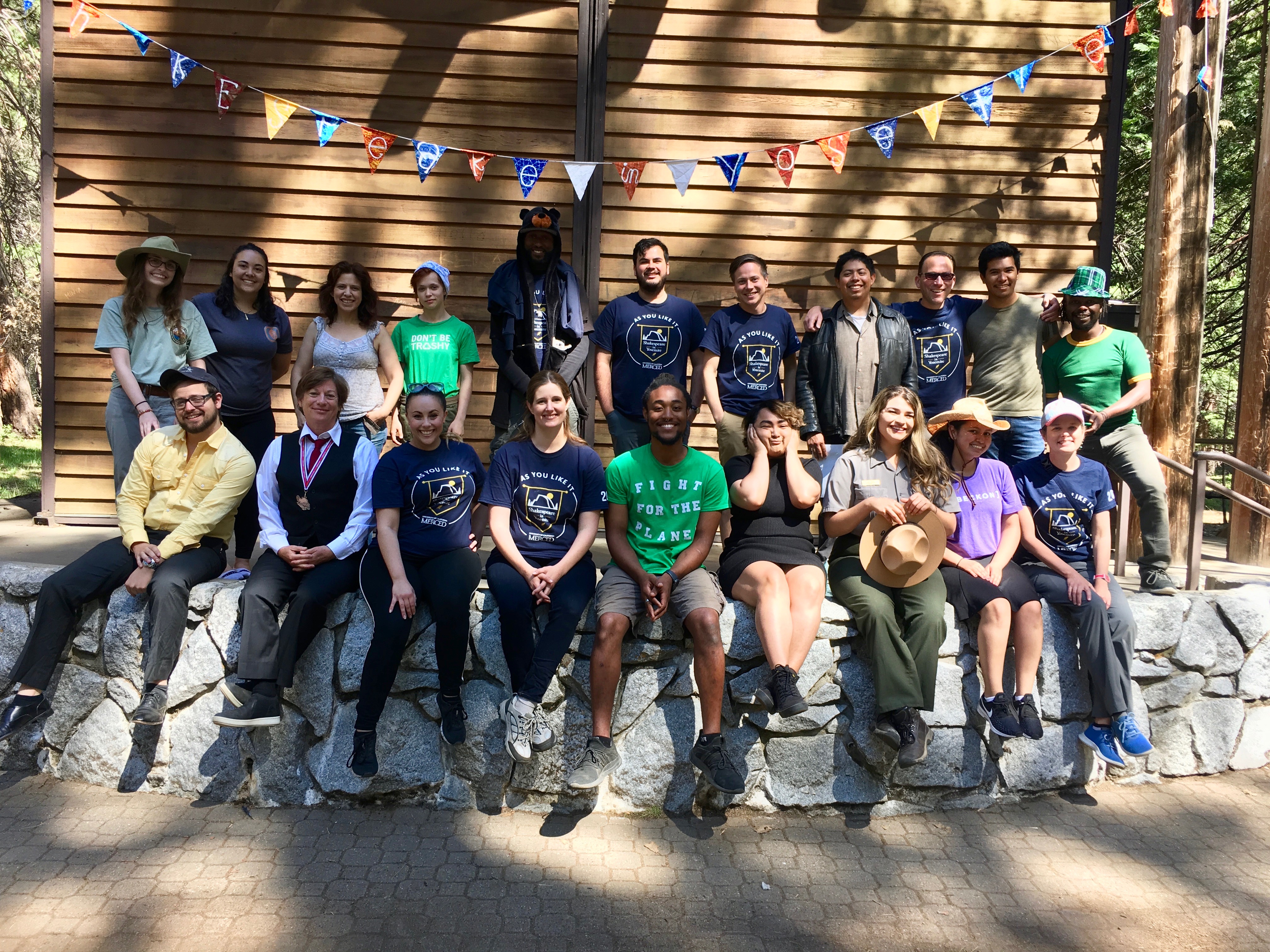 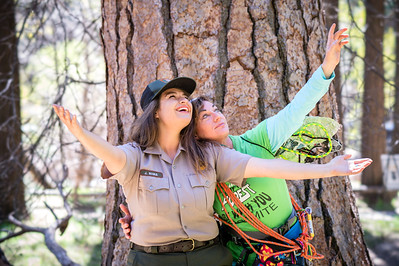 A Midsummer Night’s Dream is one of Shakespeare’s most kaleidoscopic works. In it, the young playwright recycled classical myth and English folklore into a new plot about love, desire and the transformative effects of nature and of art. All human and non-human life is here: working people, rich kids, fairies and sprites, potent flowers, a donkey, a dog, and (in our production) a bear cub.

The play is so weird, so dream-like, that it can be interpreted in all sorts of ways. We want our production to be site-specific and time-sensitive: this play is about being right here in Yosemite National Park, right now in late April 2018. Our lovers leave a fancy wedding party in the valley and flee into the back country; our “Mechanicals” (i.e. working people) earn their various livings in the Park; the object of Titania and Oberon’s quarrel is not an Indian boy (as in Shakespeare’s text) but a bear cub; our fairies take the names of Yosemite flora and fauna. We also want to be contemporary in our approach to casting. Shakespeare wrote for an all-male company with maybe three boys at his disposal to play female parts – we don’t have that problem and have simply cast the best person we could in every role.

Most pressingly, we’re interested in the ecological dimensions of play. Shakespeare was alive to such issues: his writing is hyper-sensitive to the natural environment, to the sentience of all living creatures. Furthermore, he lived through the “little ice age,” felt the volatility of the seasons, observed the first major waves of deforestation taking place across England. When Titania laments the ways in which the seasons are out of whack, we get an uncanny sense of Shakespeare’s age speaking to our own across the centuries.

In creating this show, we’ve tried to stick to some sustainable principles:

Finally, A Midsummer Night’s Dream is a play about transformation, about going into the woods and coming out a different and a better person. This land has been providing that experience to human beings for thousands of years. This show is our love letter to Yosemite and the people who love and care for it – thank you for being here. —Katie and Paul 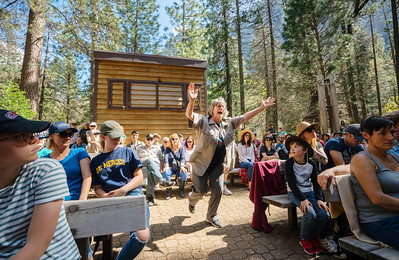 Designer’s Note: This is the second project in 2018 in which I have designed and constructed costumes made from trash. The exercise of utilizing discarded materials has not only challenged my creative thinking but also increased my awareness that we throw away so many useful materials! For our version of Midsummer, I was asked whenever possible to use recycled materials to create the costumes. To achieve this goal certain costumes were put together by utilizing clothes from actors’ closets and purchasing items from thrift stores. Specialty items such as the ass head, costumes for the Pyramus and Thisbe scene, and fairy wings and headpieces were all made from trash. Since our production is set in Yosemite NP, I thought it would be fun to select trash and materials that people use and discard while staying in the park. For example, “Poppy’s” wings are made from snack packaging and “Wall” is constructed from hot chocolate, instant oatmeal, crackers and cereal boxes, among other things. Other materials salvaged for fairy wings included brown paper bags for “Muledeer,” green bubble wrap for “Lacewing,” orange Nike boxes for Oberon and dry cleaner bags for Titania. During my research I read that people often leave behind camping and climbing gear in Yosemite. This inspired a couple of costumes, particularly Puck. I envisioned this mischievous character would be entangled in ropes left behind by rock climbers. I hope you enjoy this trash inspired production and that it leaves us all a little more thoughtful about the garbage we generate. -Kristine Doiel

A Note on Languages: The vast majority of the words you will hear in today’s show were written by Shakespeare when he composed A Midsummer Night’s Dream in the 1590s. When a word was particularly archaic or obscure, we cut and in some cases modified it to make it more accessible to modern audiences. We’ve also cut about 15% of the play’s lines. And in moving the setting from Athens to Yosemite, we’ve changed the place names and some of the plant and animal references. The city-dwelling characters speak only the English and Spanish words for the places and creatures of Yosemite, while the fairies and sprites—more ancient guardians of the natural world—also speak local indigenous words to describe the place long known to humans as the Ahwahnee.

In this "Dream," Hippolyta and Theseus head to Yosemite National Park to get married. When disagreements and passions lead the lovers and their friends to escape into the backwoods, they encounter a world of “fairies” bearing the names of Yosemite’s animals and plants, and a band of Yosemite employees like Snout the Wilderness Ranger who are rehearsing a play. With whimsical costumes, lots of live music, many laughs, and an environmental message, this year’s production has something for park-goers of all ages. It’s a perfect introduction to the world of Shakespeare, and a great way to enhance a trip to the park.

The show is headlined by Lisa Wolpe, founder of Los Angeles Women’s Shakespeare Company, and also stars Connie Stetson, known to Park visitors for her performances as Sarah Hawkins in the Yosemite theatre; Devon Glover, AKA the Sonnet Man, an internationally-known hip hop Shakespeare artist; and Yosemite Ranger Jessica Rivas. Student and community actors from University of California, Merced, and across the Central Valley round out the cast.

Cast, in order of speaking: 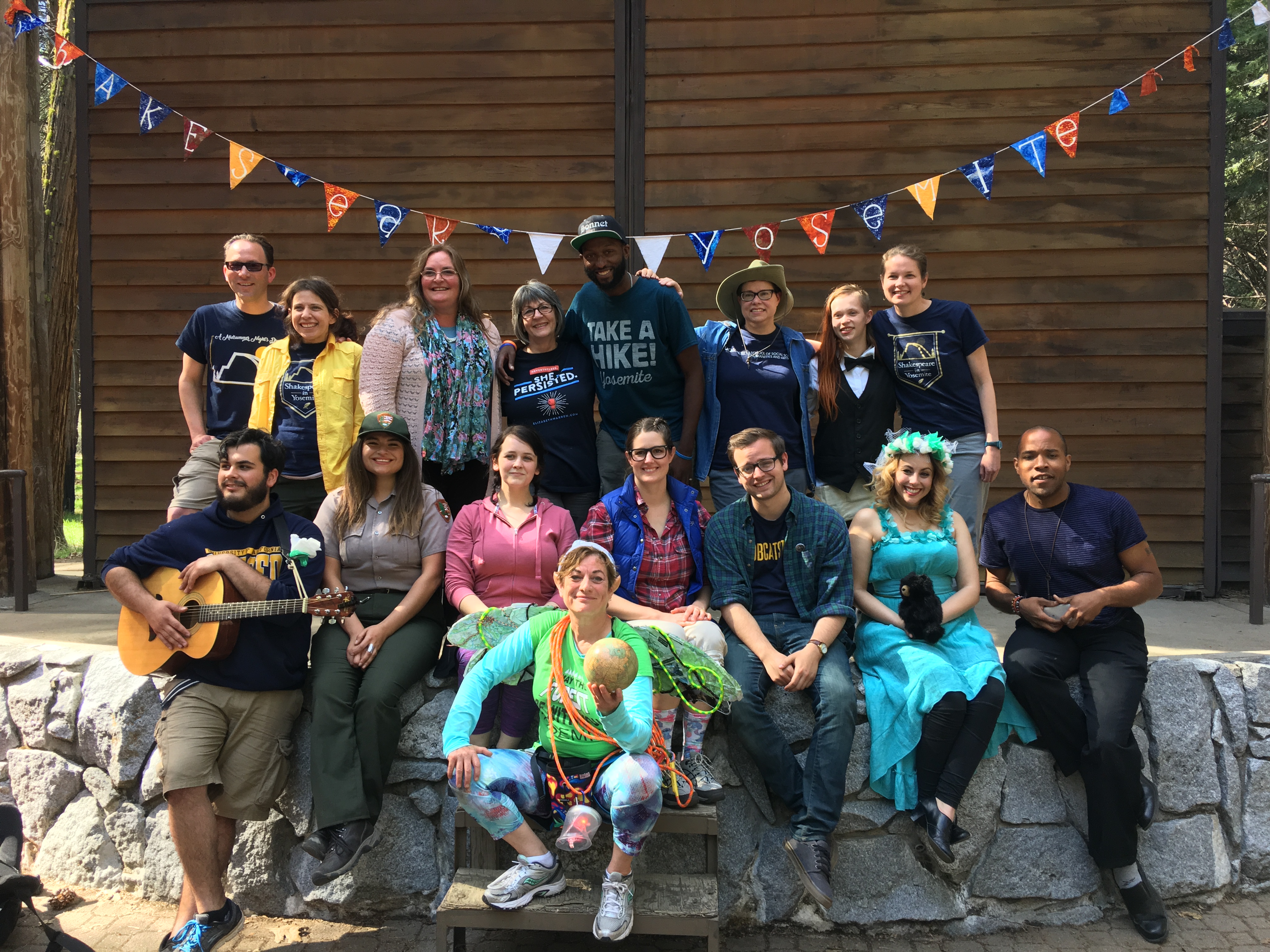 2017: One Touch of Nature: Shakespeare and John Muir 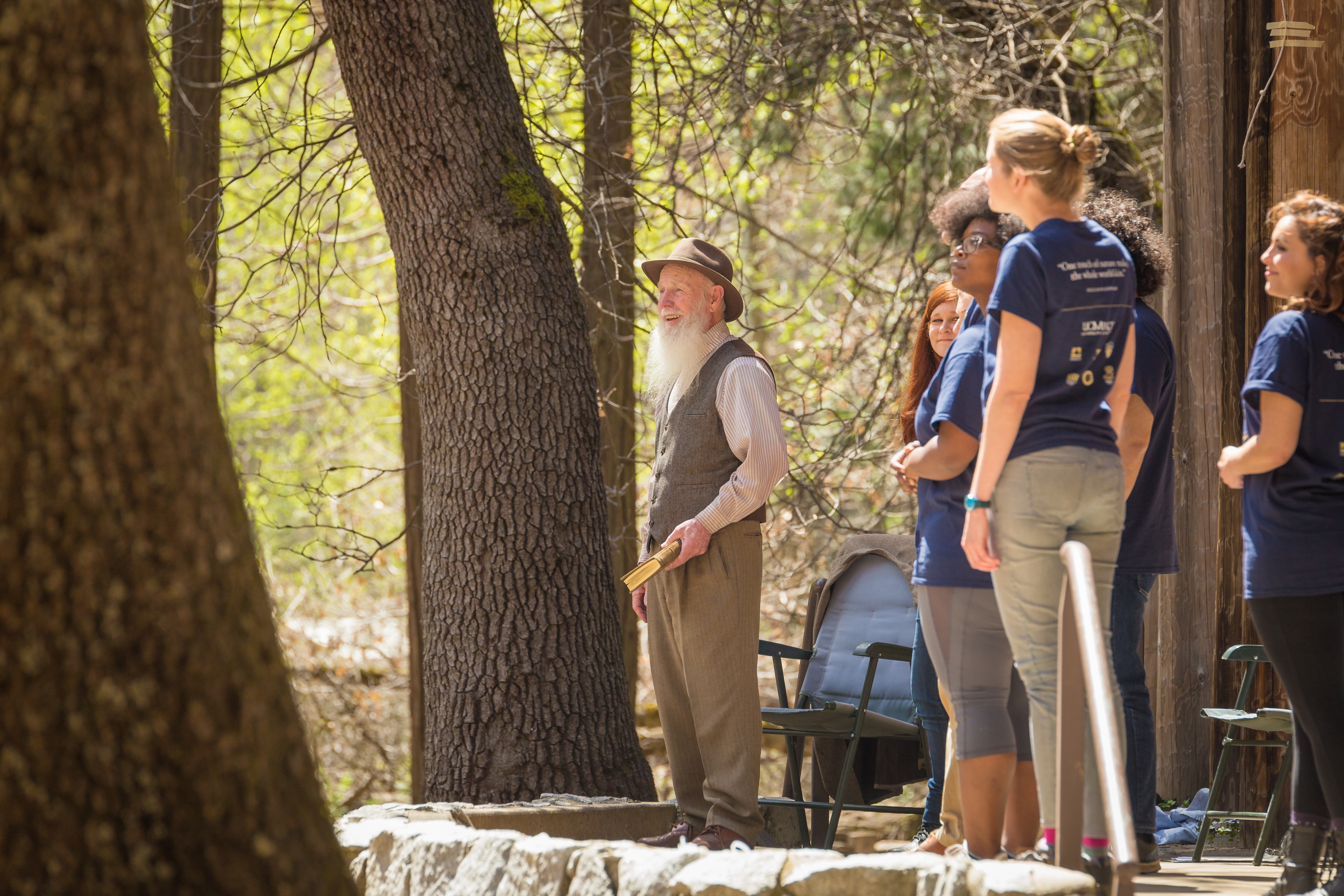 In 2017, Shakespeare in Yosemite was launched with a 1-hour original show pulling together scenes and speeches from Shakespeare with the writings of John Muir. The production featured Lee Stetson as John Muir, Ranger Shelton Johnson and a team of community and student actors, and was co-written by Katie Brokaw and Paul Prescott.

Short video about the inaugural Shakespeare in Yosemite. 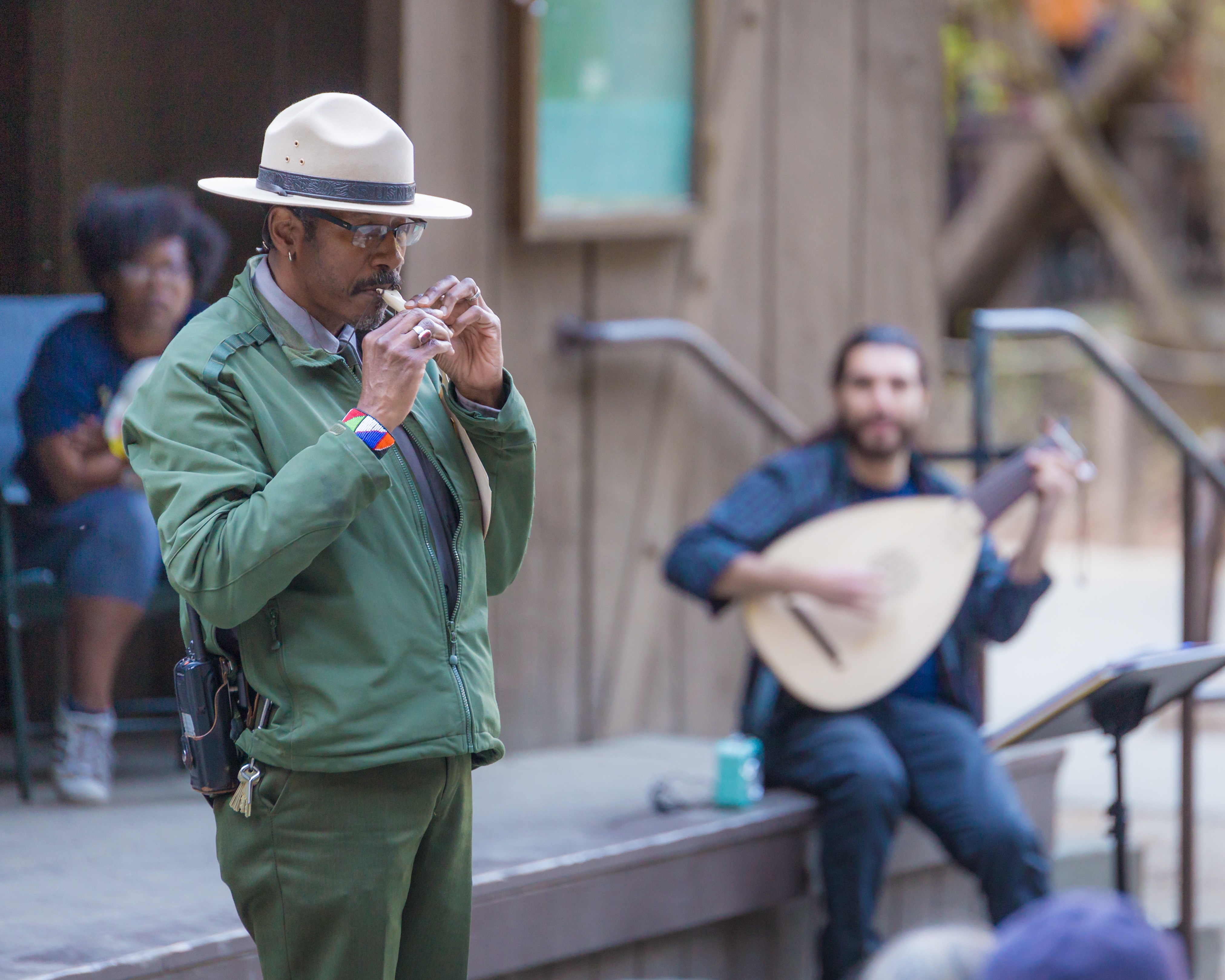 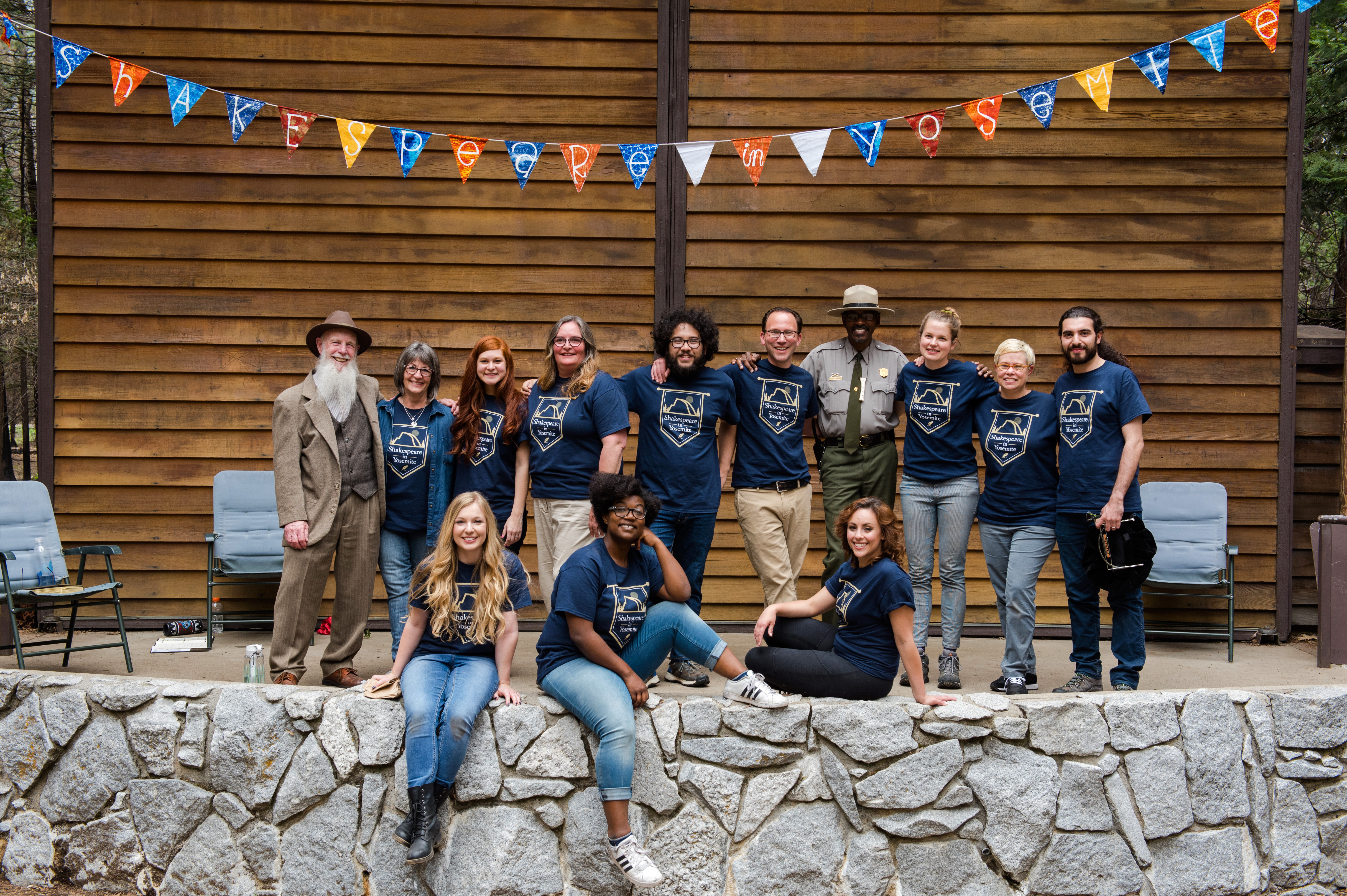